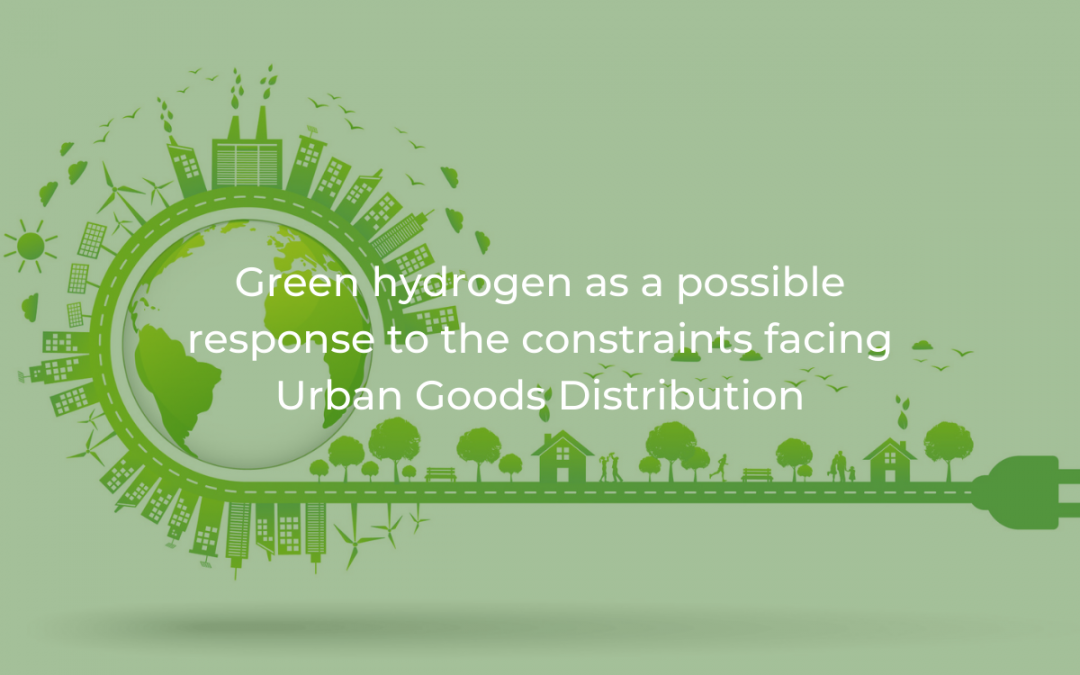 In the Logistop Webinar “Green hydrogen ecosystems in Urban Goods Distribution” different possibilities have been discussed, which will facilitate logistics to play an active, dynamic and transforming role for the whole economy to reach the paradigm of zero emissions in the medium-long term.

To this end, we have counted on the participation of  Daniel Latorre, leader of the Urban Logistics working group of  Logistop and development director at Citylogin Iberia, Juan Carlos de Pablo, leader of the decarbonisation working group of Logistop, shareholder in Ecoinversol and Innovation Manager at FM Logistic, Juan Vera, promoter of renewable hydrogen projects at Ecoinversol, David Sánchez, director at Avia Ingeniería, Momme Feddersen, H2 Project Manager at GP JOULE Think, as well as the presentation and moderation of  Tomás de la Vega, Managing Director at Logistop​. 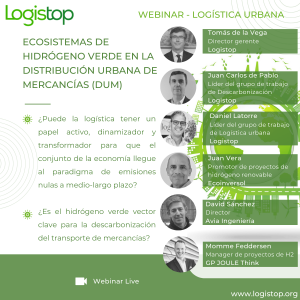 Daniel Latorre introduces the current situation of urban goods distribution and why hydrogen is a vector that can help us to respond to existing situations in cities, as well as in those municipalities that are increasing their distribution capacities. In 2030, practically all large cities and many municipalities will have implemented some kind of restrictions that will generate complications in distribution.

In this sense, hydrogen becomes a key vector that will allow us to respond to the problems we face, allowing us to separate the distribution centre from the urban centre itself, given that it will allow us to increase the autonomy of the vehicles.

However, when it comes to incorporating this type of vehicle, we face a series of barriers, the main ones being its high cost, the number of available vehicles of this type, as well as a series of technical difficulties to put it into operation. These barriers can be overcome.

Daniel Latorre, leader of the Urban Logistics working group of Logistop and Director of Development at Citylogin Iberia

For his part, Juan Carlos de Pablo highlighted the essential role it will play, and is already playing, in the energy transition of the urban distribution of goods because it allows projects to be articulated without greenhouse gas emissions or local pollutants. In addition, it complements battery electric vehicle solutions and facilitates intensive and simple DUM operation with a large potential for cost reduction. Another factor to consider is the availability of a number of existing financing opportunities.

Juan Carlos also gave us a perspective from industry analysts, who estimate that in the medium to long term, diesel vehicles in goods transport will play an almost residual role; natural gas vehicles are already available to a greater degree than hydrogen and battery vehicles, and, as a transitional solution, their use will grow initially to decline and give way to the growth of hydrogen and battery vehicles. It should be borne in mind, as Juan Carlos points out, that these analyses are prior to the current crisis situation in natural gas.

“Despite a number of unknowns such as how and when it will be deployed, hydrogen must be considered as an essential vector in the energy transition of urban goods distribution. Hydrogen vehicles are already a reality, although their availability is still limited”

Juan Vera then analysed the business model that Ecoinversol is proposing and what is needed to make this model based on green mobility thanks to green hydrogen for medium/heavy transport and easy implementation by the customer a reality in the DUM. All this taking into account the customer’s concerns: having a guaranteed supply, price volatility, quality of service, that the total cost is equal to or less than the current one, among other aspects to be taken into account.

As for the existing hydrogen distribution models, it should be considered that in the distributed model the distribution costs are lower than in the centralised model, and, in addition, a much faster deployment can be achieved in the phases we are currently in to generate demand.

To conclude his speech, Juan emphasised that developing hydrogen in the DUM requires the technology to be further developed, the customer to be convinced, promoters to try to implement it, availability of vehicles (which is the great challenge we face today) and companies that allow vehicles to be adapted to bring mass production forward. It will also be necessary to have service ecosystems that guarantee customers that they will always be taken care of, as well as developers, investors and operators.

“When developing hydrogen in the DUM, there are multiple factors involved in the entire implementation and execution process: technology, customers, promoters, vehicles, service ecosystem, developers, investors and operators”

David Sánchez then analysed the challenges and solutions facing hydrogen-powered goods and passenger vehicles and how the development of special vehicles can be undertaken through new development or adaptation.

In terms of retrofitting options, one of the most important aspects to consider, as David points out, is the legal issue. A new vehicle offers a stable legality at European level, but when it comes to a used vehicle (retrofit), the legality depends on each country, which can complicate the process. It should also be borne in mind that there is also the option of carrying out a second phase on a new vehicle, which is included in the European regulations and requires a contract between the two manufacturers. In short, the big problem with retrofitting is that the legislation is not the same in each country, so a different type approval is required in each country.

“When it comes to retrofitting a vehicle, it is generally only valid for one country and, moreover, the costs of approval and development depend very strongly on the country in which it is developed. In short, if it is possible, the retrofit concept has to be studied on a case-by-case basis”

European success story in the creation of a hydrogen ecosystem

Finally, Momme Feddersen presented eFarm as an example of a European success story in the creation of a hydrogen ecosystem. A project that traces the entire value chain from production to the use of green hydrogen in mobility: concept and project development (technical, commercial and legal), realisation and construction, organisation of the operating company, financing and fund management, operations management (operational, technical and commercial), hydrogen marketing, fleet acquisition and customer service provision.

In this respect, Momme stressed that they are focusing on three parts: 1) decentralisation of hydrogen production sites; 2) creating a network of hydrogen refuelling stations close to customers, also using gas stations; and 3) meeting customer needs by offering them different operating models with different financing models more suited to their needs.

Logistop is the benchmark workspace for collective innovation through the realisation of projects hand in hand with our members. Transforming the entire supply chain into a more efficient and sustainable one. All this with the aim of articulating and carrying out innovation projects among the members, without excluding the possibility of collaborating with or receiving support from certain organisations outside Logistop.

This website uses cookies to improve your experience while you navigate through the website. Out of these, the cookies that are categorized as necessary are stored on your browser as they are essential for the working of basic functionalities of the website. We also use third-party cookies that help us analyze and understand how you use this website. These cookies will be stored in your browser only with your consent. You also have the option to opt-out of these cookies. But opting out of some of these cookies may affect your browsing experience.
SAVE & ACCEPT
X